We were living with my dear grandfather in Connecticut when he died ten years ago. In his last week I was almost totally focused on him. I didn’t feel like thinking about other things, like what to wear each day. I’d bring the kids in to his room. We’d talk & sing & tell jokes & read. When he left us we were sad for a very long time, and still. But, there was also a sense of excitement & anticipation as our attention turned away from his final days & back again to things he taught us, things he loved, & things we now love, too, because of him. I put my earrings back on, smiled, & got back to living, for him, for others I’ve loved, for myself, & for the next generation, our children. It was not life as usual. It was life anew.

Today I put my earrings back on. I haven’t worn earrings since the first week of January. In the past two months I’ve gone in & out of the Haiti earthquake. Just as I pushed & pulled my daughters in & out of craters as we ran from the first big tremors on January 12, I continue to feel the push & pull of physical & emotional pain & healing. And, there is the push & pull of heart & mind for a beloved people who did not have the choice, as we did, to come to the U.S. for good medical care, clean water, a roof, a bed, a toilet.

I’ll continue my story. I’m only on Day Two. My student mind says that the due date for my journaling of the Haiti earthquake is the end of January. Reality says that the effects of an earth quake don’t go away at the end of the month. And, there has since been a major earthquake in Chile & Taiwan. So, the telling of this story in to the month of March, & perhaps beyond, is appropriate……

When our family was reunited on Day Two, Frank was determined to get me to a doctor. I was willing to settle for a drink of water after an hour of driving. Walls & houses had tumbled in to streets everywhere. It was hard to find landmarks. It was disorienting. There were men who had taken it upon themselves to direct traffic. They’d scoped out possible routes for vehicles to travel, working together, calling to each other from hill to hill. These were not the men who worked the streets for money yesterday. These were men who were now our brothers. We all exchanged hand shakes & comforting words, “God knows; be strong.” “Bon Dye konnen; kimbe fem.”

There was only one road for us to take. Children who yesterday carried “kivets,” “basins,” on their heads were now carrying suitcases on their heads. Some children traveled together. Some traveled alone. There was a long line of people in cars & on foot with empty coffee cans & plastic gallon jugs, waiting their turn for petrol at the one standing gas station in the area. We arrived at the house of a pilot friend. And, there we stayed the second night.

I couldn’t believe anyone would think of going inside the house, & then I realized that none of the other adults I was with had had a building fall on them. I sat in a chair in the yard & stared at my family & friends going in & out of the house. The girls trusted the adults. I couldn’t do that yet, & I knew I couldn’t keep anyone safe, either.

A visiting medical technician was leaving the house as we arrived. His organization wouldn’t let him stay. He suggested that I take his medication to calm my shaking & relieve some pain. I didn’t want any new feelings, whether brought on by meds or earthquakes. He also had antibiotic drops for Pria’s eyes, a real God-send. She let Trevor take charge of cleaning her eyes every few hours.

I was still coughing up pieces of concrete, & I was still tasting the thick dust we’d breathed. It was like I’d been eating mud pies. Yes, I know what they taste like. I was once a little girl.

A retired pilot & his wife, who had visited Haiti many times, were also visiting & they stayed through the day & night & were a great comfort.

There was a breezeway connecting the house to a little guest bedroom & shower. I sat in the chair in the back yard staring through the arch way to the chained gate facing the front of the house. We three girls needed showers. If there was a big tremor, though, we wouldn’t be able to get out of the guest room & out the gate. The retired pilot saw the resignation on my face & knew what I was thinking. He went to the gate & took the chain off. “It’s a safety measure. But, under the circumstances I think we can open the gate a crack until you & the girls are finished in the guest room.”

I washed my hair 16 times. I stopped only because I was afraid to be inside any longer. After showers, Trevor sat with Pria & me in the yard & removed pieces of concrete that were imbedded in our heads. It didn’t bother us at all. It was the least of our concerns. It looked like he was doing a routine lice check.

The tremors continued. We all felt uneasy, but we didn’t speak of it. The dog paced. There were low voices as some of the adults spoke of a friend who hadn’t been found yet. Pria played with her little girlfriend as her parents began closing up the house. Their organization had called them home, too. They didn’t want to risk anything happening to their planes. So electronics were locked away in trunks. Bags were packed. A duffel bag of donated clothes fit Dawn & me. Pria borrowed clothes from her friend. I left the nice loafers I borrowed from the Canadian man, behind the front door, & replaced them with the pilot’s flip flops. We all made plans & packed snacks for the morning when we would go our separate ways. We used water sparingly & built a cooking fire in the yard instead of using the propane. We didn’t know if our morning plans would be altered, if we’d be leaving the island the next day or staying at the house.

We pulled mattresses in to the yard & had a memorable evening of roasting hotdogs & marshmallows with some of the most delightful people in the world J Their big dog was a comfort to me as he rested beside me. Frank’s phone rang in the middle of the night. His World Vision informant said the streets were full of people heading up in to the mountains. The sea waters were rising & the Haitian population was certain a Tsunami was on its way. 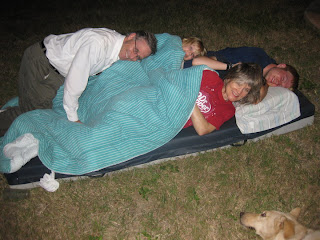 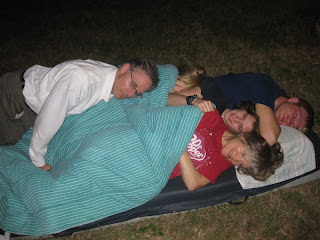 Frank in his office attire - for the week. Trevor in his blue tee-shirt - for three weeks. We three girls in borrowed clothes....

June Williams
I started blogging after the Haiti earthquake. People wanted to know I was alive. I called my postings my "AQs."...At some point I will write a blog called "From Surviving To Thriving.".....But, right now I'm doing a study on MERCY. Please join me. I want to get a glimpse of the many faces of mercy, in your lives & mine.