Jerry Rosembert is the graffiti artist who, on January 12, spray-painted the map of Haiti crying. It is now an icon in Haiti.

He has sprayed about 20 more of those paintings on walls around Port-au-Prince. He says it’s not “witty” like his pre-earthquake paintings but that it might be too soon for “cleverness.” His first one was spontaneous & from the soul – his response to the tragedy, while thousands of his fellow countrymen & women wept & prayed in the plaza of Champs de Mars.

Jerry’s pre-earthquake paintings survived the destruction. Street walls of Port-au-Prince display some of his work. “Tet Anba” shows a man upside down. It depicts Haiti as a topsy-turvy country. Another of his paintings is of a man speaking into his hand & biting a cement block, pretending he owns a cell phone & has food to eat. This is how things were before the earthquake, crippled & impoverished, & even more so today.

In hospitals, patients wait days to be seen. My name is on the record books of three doctors & one physical therapist here in the US. I even get phone calls from pleasant-sounding women, reminding me of appointments I have with these doctors. They say my name. It’s nice to hear my name.

Doctors in Haiti have coined a new phrase, “Haitian up” meaning “toughen up.” The Haitian population has proven to be a people of strength & endurance through their history of pain. This year they suffer more deeply still, but they remain strong in spirit, strong in character.

Trevor spoke to students at Biola University in California. He showed some slides. There was a photo of the Hotel Montana where he had eaten a gourmet breakfast on Sunday, two days before the massive historic landmark was destroyed.

He showed a photo of a young man walking through the ravine community where Trevor was working with six other Americans on Tuesday, two hours before the earthquake. That young man did not survive. His young bride & his brother flew home on the same cargo plane with us.

Trevor was in the UN building where, one hour after he left, 300 of the 314 employees died. The surviving 14 were seriously injured.

Trevor shared that, at first, it didn’t make sense to him that we three girls climbed a tree as the aftershocks continued. He later decided it had been the safest place for us. Though the earth split open during the quake, he hadn’t seen any felled trees.

Everyone in Haiti today is a walking miracle, he says, & he quotes Jeremiah 29:11 “For I know the plans that I have for you,” declares the Lord, “plans to prosper you & not to harm you, to give you a future & a hope,” says the Lord.

At school Pria was asked what she didn’t lose in the earthquake. She said, “my family & my relationship with the Lord.” Her teacher said, “Pria’s spiritual life is deeper than any other first grader I have ever taught. She has taught the other children many things in her short time with us.”

Dawn said it’s scary to think that solid ground isn’t really solid or safe. And, she thinks about how easy it really is to die.

It’s been three months. I cook more. We laugh more. I just finished physical therapy & we’re all having emotional therapy…our dog, Latte. We’ve all had hair cuts, even the dog. We have been in the US long enough to celebrate all three grandparent’s birthdays & Grandparent’s Day at school in Connecticut.

In Connecticut it is spring time. I’m encouraged daily by the sweet sound of birds in the morning. They’re building nests for their new families. Sunshine bounces off of daffodils & forsythia bushes. Warm yellows & warm weather meld.

It looks like someone has taken a green highlighter & colored a path along the roads, showing us the way to go. Green is scribbled throughout the dead winter branches in the woods. The air smells fresh. The flowers smell sweet. There’s new life everywhere.

Haiti is still dusted in cement powder, piled with rubble, & stacked with broken rebar. Four-story buildings are collapsed in to one. Someone said that Port-au-Prince looks like layer cakes stomped on by the boots of giants.

Haiti is not being blessed with an east coast spring time. It is not bursting forth with new life. But it is not without newness or hope. In the Caribbean, there is always a sense of newness & hope. There is no winter. If one looks for bright new blossoms & aqua blue waters, one will find them, on any day of the year, somewhere on the west side of the island of Hispaniola.

There is, again, a constant, subtle, sweet breeze of hope blowing in the air. There is a gentle wave of newness of life swirling around the island. A fresh start is on the horizon. 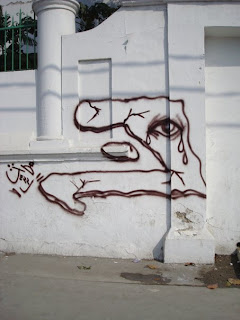 June Williams
I started blogging after the Haiti earthquake. People wanted to know I was alive. I called my postings my "AQs."...At some point I will write a blog called "From Surviving To Thriving.".....But, right now I'm doing a study on MERCY. Please join me. I want to get a glimpse of the many faces of mercy, in your lives & mine.